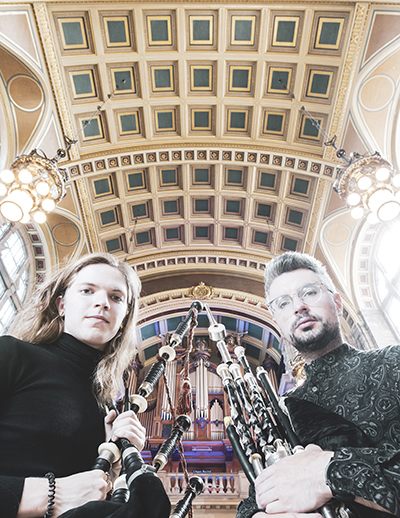 Skye’s brilliant young piper Malin Lewis returns to the Island with trad giants Jarlath Henderson and Ali Hutton for an exciting concert celebrating innovation in the piping world.
Their collaboration, Two Octaves, comprises Malin on Lindsay System Chanter; Jarlath on Uilleann pipes and vocals; and Ali playing Highland pipes and guitar. Their debut concert formed a highlight event at this year’s PipingLive! Festival in Glasgow, where they received a standing ovation.
Malin, who is a talented piping student of the Royal Conservatoire of Scotland in Glasgow, hails from the north of the Island and is a former pupil of the National Centre of Excellence in Music, Plockton.
At just 19 years old, Malin is fast becoming nationally renowned for their excellent musicianship and for being one of Scotland’s youngest chanter makers.
Malin was asked to play at Celtic Connections with Bogha Frois this year and won the Danny Kyle Open Stage competition with Luc Mcnally and Sam Mabbet.
They have been featured in Piping Today and say one of their greatest achievements is making a wooden Lindsay system chanter which they will be featuring at the concert.
Malin said: “I was asked to feature the chanter that I had worked on with Donald Lindsay and wanted to showcase it at the PipingLive! concert.
“As it is so new, I wanted to demonstrate how the chanter fitted into our tradition and so the concert draws parallels between the different types of pipe.
“We also use effects pedals on the pipes to make unique sounds. The material is mostly self-written and, although the music is quite contemporary, it is still rooted in the Scottish tradition.”
On Saturday 26 October at An Crùbh, Duisdale the trio will perform tunes from the past as well as new music and pieces written for the PipingLive! concert.
Malin added: “It is very special to be able to come back to Skye and play in a venue that is responsible for much of my inspiration over the years. It is very exciting to share the new music and to also share it with two other incredible musicians.”
The event is part of SEALL’s continuing Autumn programme and begins at 7.30pm.