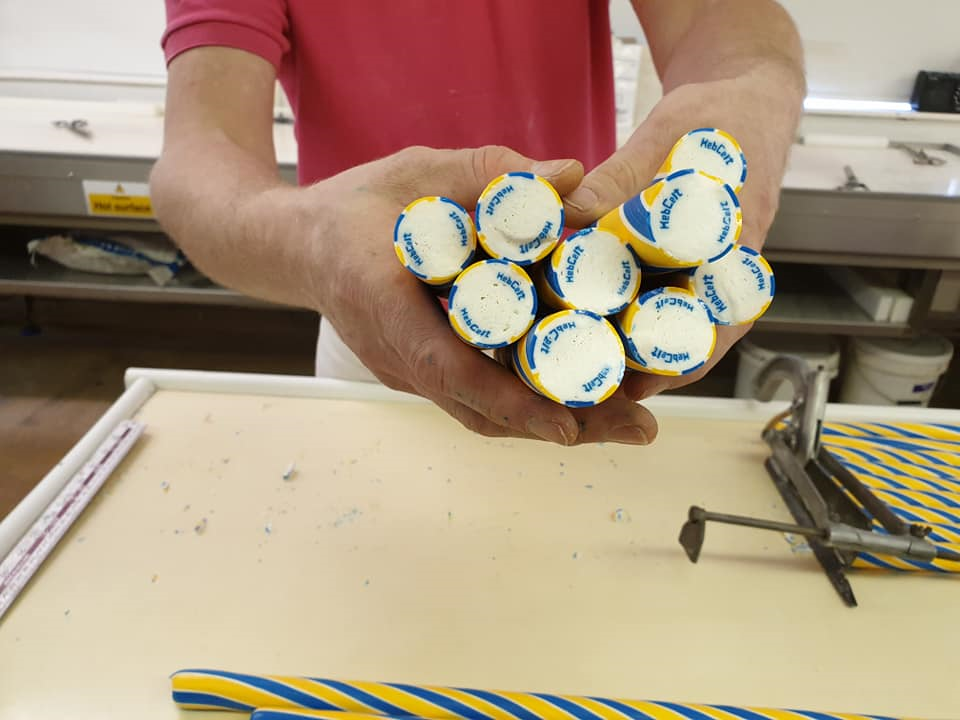 A sweet-seller from Skye has created the ultimate HebCelt delicacy – a stick of rock that says HebCelt right the way through!

Inga Bonk of Inga’s Sweet Treats has been a long-time fan of Hebridean Celtic Festival, attending every year from her home in Skye and this year selling her sweet treats not just at the Town Hall craft market but from her stall at the festival arena itself.

She hatched the idea of trying a HebCelt rock after testing Isle of Skye rock at her shop in Wentworth Street in Portree. The blue and yellow stripes of the HebCelt tent were her next inspiration, and the only possible place to get the rock made was immediately obvious – Blackpool!

Inga stated: “The Promotional Candy Company have made my Isle of Skye rock for three years, so I went to them with the idea for a limited edition HebCelt rock. They can make split batches of rock canes and individually-wrapped sweets, with all the wrappings biodegradable and plastic free.

“Not only did they make the rock, but they let me go down and watch it being made, which was absolutely fascinating and marvellous. There are just 400 sticks of rock, which I will only sell at the festival itself, but you can get the sweets from today, along with all my selection of chocolate, kids’ sweets and specials like vegan and sugar-free sweets.”

You can buy exclusive HebCelt rock from Inga’s stall at the Town Hall today (Monday July 15th) tomorrow and Saturday, at the North Harris show on Thursday and from Inga’s Sweet Treats at the HebCelt site.