No vehicle access to The Plock from Heathmount Place 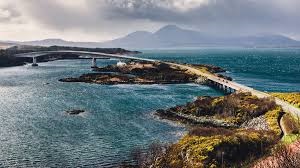 Vehicular access to The Plock from Heathmount Place is to be closed off.

Kyle & Lochalsh Community Trust stated they have been approached numerous times by residents who have raised concerns.

The Trust stated: "Things which were raised with us include:

- increased vehicular traffic,
- cars racing up the Plock,
- cars speeding past small children playing on the road,
- cars and buses unable to reverse when other vehicles are approaching from the opposite site
- cars parked on private driveways being damaged on regular basis by drivers unable to reverse properly
- tour buses being left at that Plock entrance despite there being no space.

"We understand that this move will not be popular with everyone, however the health, safety and well-being of people who live nearby is of paramount importance to us and steps had to be taken. We ask that you respect this and do not try to damage the bollard which will be installed at that entrance.

"This is the second time we are installing a bollard at that entrance. It is believed that it has previously been damaged by a local person. If you see anyone tempering with the new bollard, please contact us and the police."