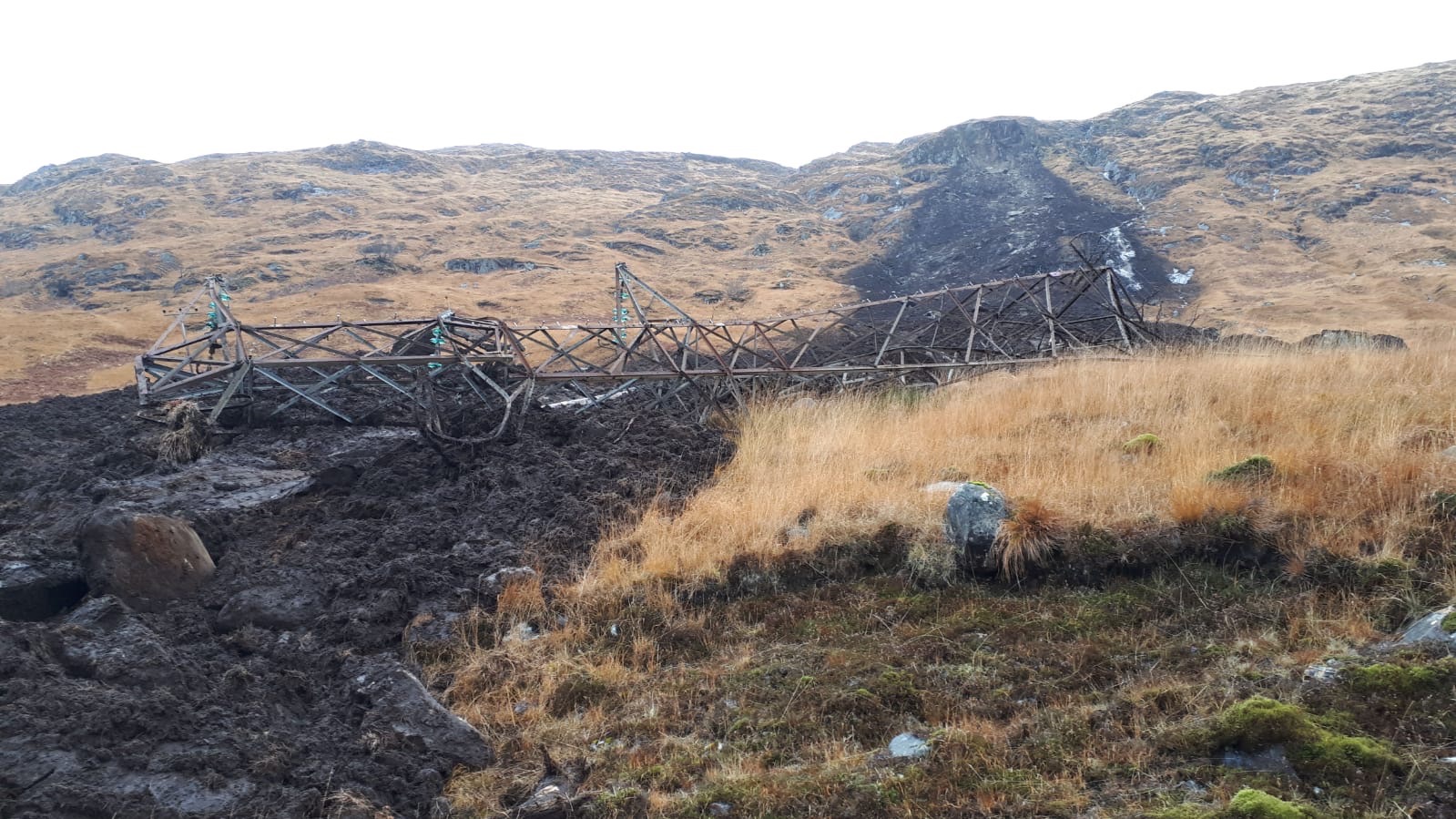 A major power cut is currently leaving parts of Skye and the surrounding areas without electricity (Monday 12 November.). It initially affected around 30,000 consumers.

Now (4pm) SSEPD say: "Due to logistical issues in coordinating a complex restoration plan, we are now expecting to restore supplies by 18:00 [6pm] as quickly and as safely as we can."  This is seven hours later than they first claimed today.  Some areas will be served by mobile generators.

Portree's lights went back on briefly just before 2pm but flickered off again soon after.

The power cut follows a landslip that damaged a part of the overhead transmission network west of Invergarry, as shown by the photograph above.

According to Highland Council, the landslip has deposited approximately 9000 tonnes soil and rock half way along the public road which connects Loch Garry to Kinloch Hourn near Kingie.   Council engineers and representatives from SSE are currently on site and the road is closed to all traffic.  The route will remain closed while work to clean up the debris takes place. This will be followed by safety inspections to the slope and, if required, any stabilisation works will be carried out before the road re-opens to the public.

Portree was reported to have regained power around 6pm.

Earlier Scottish Power estimated "the fault" would be resolved around midday - or 1pm at the latest.

A full list of each affected postcode can be found on the SSE power tracker.  Portree High School was closed because of the power cut.

A new statement says: "SSEN received reports of the fault shortly after 9am and immediately started carrying out investigations. This included the deployment of a helicopter patrol, which identified damage to the overhead line network caused by a landslip in the area to the west of Invergarry. A team is currently on site to assess impact and options for repair.

"Whilst this repair is ongoing, power supplies are being restored through alternative means. This includes re-routing supplies from other parts of the network, utilising backup power stations and the deployment of mobile generation.

"SSEN is contacting customers who are on its Priority Service Register to offer help and support and would encourage anyone who may have concerns or require extra assistance to call the power cut helpline."

Around 18,000 customers throughout the Outer Hebrides and as far to the east as Kyle of Lochalsh were without power from around 9am this morning (Monday November 12th).

Power started to return to customers in some parts of Stornoway before 10am as the local power station was brought on line.  But other parts of the town had to wait another hour or more. Power remained off in less central parts of Lewis until after midday, and remains off throughout Harris.

First indications from the centre stated that power would be back on to all areas by by 10am, then 11am.  Then the new target for the Outer Hebrides became 2pm with 4pm for those areas of Skye affected. However, those deadlines came and went as well.

Power stations at Battery Point and Arnish in Lewis, at Ardveenish in Barra and at Loch Carnan in South Uist have all been fired up to restore supply to most of the Outer Hebrides, and are expected to run for the rest of the week.