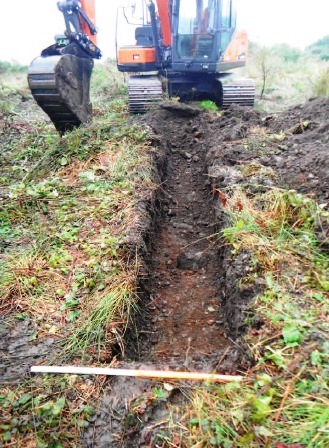 Exciting finds have been uncovered during preparation for Broadford's new community hospital, to be located between the Dr Mackinnon Memorial Hospital and the Broadford Health Centre.

In 2011, archaeologists supervising the site clearance of the Broadford Health Centre uncovered remains of an intriguing cairn-like structure, and numerous other features including: a grain-drying kiln; an underground stone-lined passage known as a ‘souterrain’; and a burial cist containing a ceramic Beaker vessel.

Preparation work will continue on Broadford's new community hospital site next week.  Starting next Monday 20 August 2018, an ecologist and staff from the AOC Archaeology Group will be on hand to supervise as mechanical diggers begin removing the vegetation and top soil from the site.

The early site strip has been organised in order to mitigate against any potential archaeological risk that could impact on construction, allowing sufficient time for archaeology work if this is required. An assessment will also be made over any potential ecological risks.

Actual construction of the new Community Hospital Hub is expected to start mid-2019.

The ‘site scrape’ work at the new site and ecological/archaeological risk assessment is expected to take two weeks. The site will also be rolled upon completion of the work.

Diane Forsyth, NHS Highland’s senior project manager, said: “During the first week, the ecologist will survey the soil and vegetation excavated from test ‘scrapes’. Then staff from AOC will begin supervising the stripping of the area in stages in order to minimise the amount of earth destabilised on the site. Some terracing will be required because of the site’s hill slope.

“After this initial work, both the ecologist and AOC staff will then set tree protection zones. As the work progresses, they will also continue surveying and monitoring the site.

“During the second week, the ecologist will return and further survey and check the silt traps/fencing put in place.”

Design work on the new facility is continuing and a planning application is expected to be submitted within the next couple of months.

Pictured about is a test ‘scrape’ conducted on the site by a mechanical digger last November.