US students visit Skye ahead of Fringe premiere 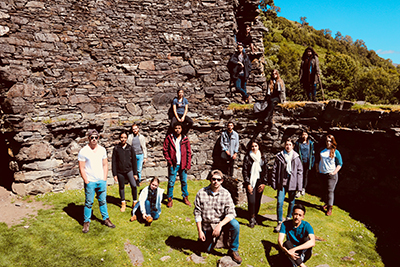 Eighteen US theatre students are being deeply immersed in contemporary and traditional Scottish culture before presenting the world premiere of a new play by Davey Anderson at the Edinburgh Fringe.

Exposure to Scotland's performing arts sector (and the chance to be part of the world's largest arts festival) provide an unbeatable opportunity to help prepare talented young people hoping for a bright future in US theatre, TV and film.

Alex Fthenakis, who runs Pepperdine Scotland, said: "Scotland often doesn't realise how much of a 'wow factor' experience with its new writing has in the rest of the world.

"For young graduates to have worked closely with Davey Anderson or Lynda Radley on a significant Edinburgh Fringe premiere and to have met people like Cora Bisset and Peter Arnott makes potential US employers sit up and take notice.

"Our aim is to deeply immerse them in Scottish theatre – but more than that, to let them discover something about the country, its history and its astonishing variety. It's a place that offers everything from vibrant modern cities to remote and beautiful countryside."

The students spent time in Glenelg on the west coast where playwright and storyteller Eddie Stiven introduced them to elements of Highland history, including the impact of the Clearances, and the region's long Gaelic tradition.

They spent time on Skye at Sabhal Mòr Ostaig, the Gaelic college, and hosted a ceilidh for the Glenelg local community.

Student Leyla Dillig said, "It was a transforming experience to learn Scotland's history in a way I have never experienced before. I found it inspiring to learn about ceilidh tradition and its influence on theatre making in this country. It was immensely helpful in understanding how Scottish theatre impacts both local communities and national culture, and it put us in a great place to begin working on a Scottish Theatre inspired piece ourselves."

The group is now in Glasgow where they are rehearsing The Abode, Anderson's new play which addresses the appeal of Alt Right extremism among certain disenchanted young, white, working class American men.