Week of action to remove untaxed vehicles from the road 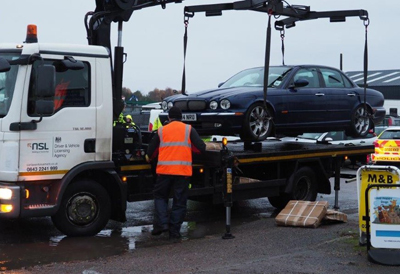 Officers from Police Scotland working with a range of partner agencies have worked together to remove a number of abandoned and untaxed vehicles from the roads of the Highlands.

The first week of action has seen in excess of 50 vehicles seized and 40 clamped.

This action has followed a number of complaints from local residents regarding apparently abandoned vehicles and vehicles which have clearly been used without excise.

Over the course of the week of action, further road traffic offences have been detected, such as vehicles being driven without insurance.

Highland Council and the DVLA will continue to carry out enforcement action across the region, supported by Police Scotland.

Chief Inspector Iain MacLelland said: “I am delighted to have the support of partner agencies in this co-ordinated approach to abandoned vehicles in our community.

"Local residents have consistently raised concerns about anti-social behaviour linked to these vehicles and there is the obvious danger of vehicles being used which are not roadworthy.

"Seizing these vehicles will not only clean up local communities but also keep our roads safe.”

Bethan Beasley, National Wheelclamping Manager for the DVLA, said: "Whilst over 98% of vehicles on the road are taxed correctly we are working closely with officers from Police Scotland to remind drivers that not taxing your vehicle is against the law. We don’t need to spot a vehicle on the road to take enforcement action but if we do, wheel clamping is an effective way to make sure that an untaxed vehicle is not driven on the road.

“It’s never been easier to tax your car, so there really is no excuse. We would rather not have to clamp or remove vehicles, but we do need people to understand the consequences of not doing so. Having your vehicle clamped is expensive and inconvenient.

Constable David Miller who led the operation confirmed that this action was generally positively received by the community. He added: "A number of other road traffic offences had also been detected during the operation. The owners of all the vehicles which have been clamped or seized will receive fines in addition to the vehicle excise due directly from the DVLA.

"These will be sent to the individuals concerned on completion of the operation."

Anyone who wishes to report untaxed vehicles should do so online here.