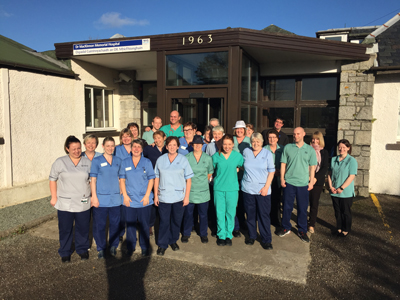 Staff at a Skye Hospital earned praise for responding “admirably” to a major incident exercise while still coping with their normal day jobs earlier this month.

Almost 30 staff were involved in the two-hour-long exercise at the MacKinnon Memorial Hospital in Broadford designed to test NHS Highland’s current clinical and tactical procedures in the event of a major emergency.

The exercise, known as ‘Exercise Insight’, began at 11am on Thursday 2 November 2017 and virtually everyone working on shift at the hospital – whether doctors, nurses, radiographers, physiotherapists, office staff or porters – was involved.

A year in the planning, the exercise’s scenario involved a van overtaking a tour bus on the Kyleakin straight in the south of Skye colliding with an oncoming family car.

Rather than having real people playing the part of pretend casualties, 22 virtual casualty profile cards – giving personal details and clinical information - were used in what is known as a Practical Exercise Without Casualties (PEWC).

Director of the exercise, Dr Alistair Innes, said: “The PEWC stretched the whole team at Broadford, but everyone performed admirably.

“I think for many people involved, it was the first time they had done an exercise like this. We tried to keep it as real as possible while still making it manageable. We used cards to denote casualties because it would be difficult to have 20 or so people pretending to be injured.

“Especially as it was a normal working day and staff still had to do their normal jobs while dealing with all the chaos.”

Dr Innes, clinical lead Rural Practitioner for Mackinnon Memorial Hospital, said the idea of ‘Exercise Insight’ was to test if staff were doing the right things, at the right time, if such a major incident did occur. Ensuring, for instance, that casualties were placed in the best and most suitable areas of the hospital.

He said: “I would like to thank all the staff for their efforts on the day and for engaging so well in the exercise.

“All the staff coped well in an extremely stressful situation and not only am I confident that they are now in a position to cope in such an emergency, I’m sure it helped to highlight certain aspects where they might require more training or need to upgrade their skills.”

‘Exercise Insight’ was co-ordinated by Peter McPhee, NHS Highland’s emergency planning officer, who also oversaw the simulated communications with outside agencies and the media on the day.

Part of a rolling training and exercising programme required as a statutory obligation under civil contingency legislation, NHS Highland conduct tests like these every three years. It also conducts a similar ‘desk top’ exercise every year.

Dr Innes said ten minutes after the exercise ended, staff were debriefed on their immediate thoughts over how it went.

In December there will be a more formal debriefing to identify any actions needed to further improve response arrangements at Broadford. This will form the basis of an action plan that will be submitted to NHS Highland’s north and west emergency planning and business continuity group which is tasked with ensuring implementation of the plan.