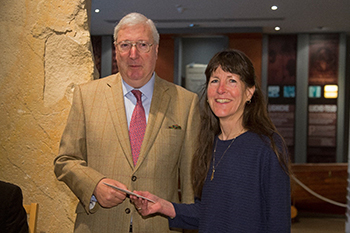 A United States poet has won the MacDonald of Sleat poetry prize for the second year in succession.

Deborah Moffat, who began writing Gaelic poetry in 2013, hails from Vermont but now lives in Fife.

The competition which is run by Sabhal Mòr Ostaig was instituted by Sir Ian MacDonald of Sleat in memory of his daughter, Deborah. The competition has a tree related theme each year and this year it was a branch or branches. The Branch of Hope was the title of the poem composed by Deborah and selected by the panel of three judges.

Deborah received her prize from Sir Ian MacDonald at a gathering at the Museum of the Isles at Armadale on Saturday 30 September. Sir Ian MacDonald commented: “I particularly liked Deborah’s poem which also read like a prayer. My daughter, Deborah, would have loved it and understood the feeling and words of hope."

Speaking on behalf of Sabhal Mòr Ostaig, Principal, Professor Boyd Robertson, said: “This competition is important as it inspires people to write new verse in our language and adds to the body of literature in Gaelic. And it is a felicitous way of renewing memories of a daughter cut off in her prime.”

Deborah's poem can be read below:

BRANCH OF HOPE
I was raised on a remote, lonely island,
a harsh, unforgiving island,
an island without hope.
There was a garden on the island, lush with leafy trees,
the branches whispering in a strange language,
revealing the secrets of the world.
It was a secluded garden, dark, solitary,
a garden without joy, without fellowship,
a garden without hope.
But at the far edge of the garden, a slender branch
of a fertile apple tree stretched over the wall,
waving merrily to the world.
It was a healthy, flourishing branch, intrepid,
seeking light, seeking knowledge,
a branch of hope.