Summer of success for artists at Skye admiral's home 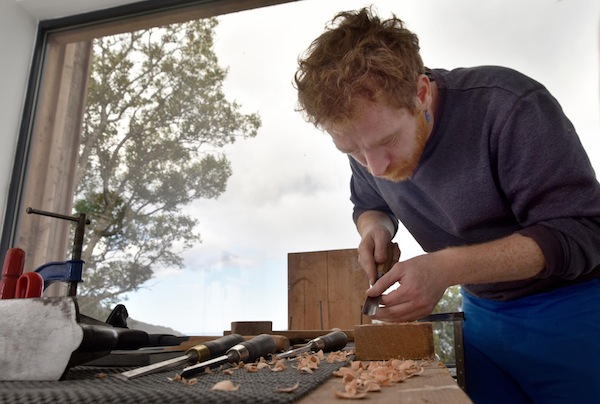 The future looks bright for the new artists' residence at the former home of Vice Admiral Sir Roddy Macdonald - war veteran, painter and Chief of the Skye Highland Games.

This summer saw Wasps Artists' Studios run a limited number of residencies to make sure the three units, at Braes, met the needs of artists and makers. These were successful and Wasps is now ready to take bookings for 2018.

As part of the project Wasps, and Portree-based Atlas Arts, are offering an annual fully-funded and supported residency to an artist, maker or designer.

Martin Campbell, pictured above a designer and maker who runs the Rag and Bone Workshop in Glasgow, was the first to benefit from the programme and spent six weeks based in the Alan MacDonald Studio.

He said: "The residency at the Admiral's House gave me an opportunity to reassess my current practice free from any commercial pressures or time constraints.

"It offered me the physical and mental space to be playful and rediscover the simple joy of making things."

Known for the breadth of his work, which includes sculpture and furniture, Martin was able to spend time sketching the landscape, linking up with locally-based artists, and even beachcombing to find materials for new pieces.

Audrey Carlin, Wasps Chief Executive Officer, said: "The Admiral's House has had a successful first summer and we believe it has the potential to become a highly sought-after destination for artists, designers and makers from Scotland and far beyond.

"The facilities have been specifically designed to suit their needs, but just as importantly it is a truly inspirational location overlooking the sea to Raasay. Skye has a vibrant creative community and anyone staying at the residency has the chance to get involved with other artists during their stay.

"Martin's residency got the project off to a great start and was a superb beginning for our partnership with Atlas Arts."

The Vice Admiral, generally known as Admiral Roddy, was a keen watercolourist whose brushes and easel accompanied him on all his travels, including throughout his service during World War II and subsequent conflicts.

He spent many happy years at the cottage during retirement. It was gifted by his estate to Wasps for use by artists. The charity has kept some of Admiral Roddy's paintings and possessions at the property to preserve the memory of the time he spent there with his wife Lady Pam.

Wasps is Scotland's largest creative community, providing studios and workspaces people in the creative industries from Shetland to the Borders.

One aim of the Admiral's House project is to allow artists to connect with local communities, oral and social histories, music, and Gaelic culture.