Celebrate Glendale closes with Festival of the Sea 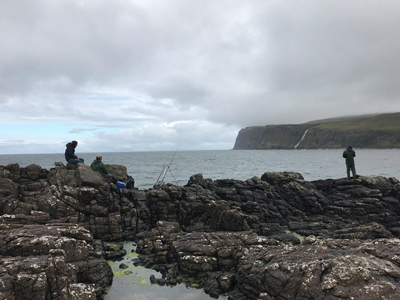 "Celebrate Glendale" events were brought to a close on Saturday 19 August with the "Festival of the Sea."

The festival included the Glendale Fishing competition and a Sea Food BBQ.

Conditions were worse than expected for the fishing competition with only the hardiest of anglers tempted to compete for the variety of trophies on offer.

Ronnie Macleod offered hospitality and shelter in the historic and atmospheric Pier Store where the weigh in took place. It was no surprise that the winners were two local father and son teams who split the prizes between shore and boat.

After the weigh in celebrations continued with a sea food BBQ. Fish from the competition were prepared by local resident and Head Chef of the Three Chimneys Scott Davies. Tristan and Keith Jackson of Orbost Farm also helped to gut and fillet the fish. The BBQ included hand dived Sconser Scallops, Local Langoustines, Oysters and a Fish Pie which had been prepared by the Three Chimneys. Vegetarian options accompanied the fish dishes with all the vegetables supplied by local Glendale producers, Andy Stables (Croft Produce) and Anthony Hovey (Skye Veg). A Traditional Herb Taboulleh with fennel, parsley & mint, Kale Salad, Roasted Root Vegetables with a sweet honey dressing, Curried Potato & Leek Salad and Cucumber Raita were lovingly prepared by Angie Atherton, Hannah and Petrie Pentikäinen while being overseen by Gareth Craft in the Red Roof Cafe.

Local Band "MacLoud" added the Samba party feel to the evening as the community came together to eat and celebrate at the recently purchased and community owned area at Meanish Pier. A bonfire built with donated wood, set against the magnificent backdrop of the Minch and Outer Hebrides created the perfect focal point for the community event.

Speaking after the party, Roger Holden, Director of the Glendale Trust, said: "It was a really tough day for fishing so well done to those who braved the conditions and took part. For the weather to be so poor but end up being perfect for a BBQ and bonfire was really amazing. We are so thrilled with the contributions from everyone who came along and helped us celebrate Glendale as a place and its association with high quality food and produce. The support from so many of the community has been a huge boost to all those involved."

Photograph by from Glendale, Isle of Skye Facebook page.