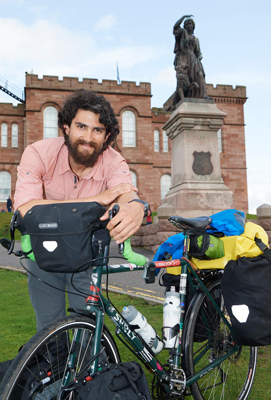 A cyclist who is heading for the Isle of Skye after travelling on the NC500 has issued a message regarding litter.

Rodrigo Salvatierra Arraño, a mechanical engineer from Santago in Chile, is half way on his seven month tour of Europe, having started in Spain in May.

Rodrigo met with Councillor Trish Robertson, Vice Chair of the Council’s Places Committee, at Inverness Castle, the start and end point of the NC500 route, on 23 August.

He said: “The Highlands are beautiful and remind me of the scenery in Patagonia.  It is a shame that it is spoilt in places by litter.

“Whilst cycling on the beautiful Highland roads I noticed some plastic bottles at the side of the road. I picked these up and then I saw some cans and more things. I had cycled for about 5km and by this time I had filled all my panniers with litter."

“I also noticed that a lot of people are leaving rubbish beside the bins instead of inside of them, especially when they are full.  The cities and bigger towns are probably cleaner than the cities in Chile, but in the countryside the contrast is more noticeable – the beautiful scenery and the waste!”

He added: “I'm really impressed with the resemblance between the Highlands and Chilean Patagonia and it would be really sad not to take the proper care to maintain it, so everyone can enjoy it.”

Councillor Robertson thanked Rodrigo for collecting the rubbish and taking it to a bin and for highlighting the issue.  She said: “Highland is growing in popularity with tourists from across the world and we want to preserve our beautiful environment and show it to the best advantage. I appeal to both visitors and locals – put your litter in a bin or take your litter home with you. On no account should anyone throw their litter out on the side of the road.”

She added: “We will be looking at what we can do with partners to tackle this growing litter problem. This will include looking at whether we need some more bins and also our collection regime in remote parts. We will do our bit, but we also need everyone else to do their bit too. We all have a responsibility to keep our country beautiful!”

Next stops for Rodrigo are Skye, Austria and Ireland.  Councillor Robertson thanked Rodrigo for visiting the Highlands and wished him well on his tour.