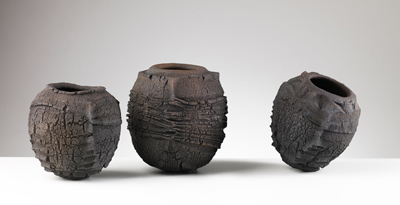 The Isle of Skye has once again proved to be an inspiration.

The Scotland: Craft & Design Pavilion 2017 edition will feature ceramics by Patricia Shone, inspired by the landscape of the island.

Patricia Shone was born in Scotland but grew up in South Devon.  After studying ceramics in London, finances and a love of food led her into working as a chef both there and in Italy.  Eventually the cooking took her to Skye where she returned to potting and where she has remained for twenty years.

“My work has developed over the years in response to the powerful landscape around me on the Isle of Skye.  Also to a feeling of connection with the passage across the land of its past inhabitants.  I make mostly functional forms, boxes, bowls, jars, rather direct representation of the landscape, because they are innately human vessels of containment.

"The surfaces of the land are eroded by forces of climate and human intervention, but the substance of it remains constant and immutable. Traces of the past are scratched all over the hills, and remain in ruined form, as fading monuments to the communities who worked the land.”

“I want the natural forms, colours and textures of the work to engage the viewer with a landscape beyond daily experience. As we advance, technologically, the surfaces we touch become increasingly synthetic and machine finished. I feel that what challenges us now is the reality of nature – wild, uncomfortable, dirty, unpackaged, visceral experience.”

Craft Scotland and Emergents are thrilled to present this second country showcase. Once more, the pavilion will feature a custom-made stand designed by award-winning Scottish design studio, GRAS. They won the prestigious Grand Prix award at The Drum’s Scottish Design Awards for the Scotland: Craft & Design 2016 pavilion design.

Craft Scotland is the national development agency for craft. It works to unite, inspire and champion craft through creating opportunities for makers and audiences. Emergents is a community interest company that aims to support the development of creative careers, enterprise and the economy in the Highlands and Islands of Scotland and beyond. Both Craft Scotland & Emergents are supported by Creative Scotland. Emergents is funded by HIE (through European ERDF funds).